Big Tech gets scolded for snapping up startups

Earlier this week, the House Democrats dropped a massive 449-page document dragging Big Tech through the dirt. The report, which contained evidence collected over the past 16 months, compared Google, Amazon, Apple, and Facebook to “oil barons and railroad tycoons,” and accused them of holding monopoly power.

Big Tech hit back, trying to defend itself -- but the walls are closing in. This report is just one of an increasing number of investigations into the companies. The FTC's investigation into Big Tech's business practices is ongoing, and the Trump administration is anticipated to launch an antitrust investigation into Google any day now.

Less valuable startups founded since 2000 and subsequently acquired by FAAMNG include:

It's probably just a total coincidence that right as the antitrust doc dropped, Facebook immediately announced that it will ban QAnon from all of its platforms after months of pressure. Some people have accused Facebook of purposely timing the announcement for the same hour as the most significant antitrust investigation in history.

Strangely enough, Facebook seemed to get off the lightest of all companies in the antitrust investigation. It was mentioned only 944 times (vs. 1,285 for Apple, 1,861 for Amazon, and 1,966 for Google).

Facebook was accused of holding monopoly power in online advertising and social networking, and maintaining this through “acquire, copy, or kill” threats. Interestingly, ad tech was mentioned only 15 times within the report -- despite being the basis of Facebook's monopoly.

On Wednesday, Facebook announced it will halt political ads -- but not until after the polls close. This announcement follows a similar measure by Google a couple of weeks ago.

As Charlie Warzel wrote yesterday, Facebook's recent actions "are a tacit admission that what is good for Facebook is, on the whole, destabilizing for society".

Unfortunately, Facebook is slamming the barn door long after the horse has bolted. What we're seeing now looks like a desperate attempt to reduce liability.

Wait...Microsoft has an App Store?!

Ever since Epic Games kicked up a stink about Apple's 30% payment cut earlier this year and launched its #FreeFortnite campaign, Apple has been under increasing pressure to change its App Store policies.

Last month, a group of Apple's biggest critics -- including Spotify, Basecamp, ProtonMail, and Blix -- came together to create the Coalition for App Fairness, an organisation designed to "ensure a level playing field for platforms like Apple and a consistent standard of conduct across the app ecosystem".

To add salt to Apple's wounds -- and also in an attempt to let the world know that it actually has an App Store -- Microsoft has announced '10 App Store principles' for its Windows 10 App Store.

Some of these principles include:

Interestingly, Microsoft still takes a 30% cut of all Xbox purchases, which it has justified by claiming that this is "more specialised" and requires expensive hardware that is subsidised through game sales.

Alex Coad discusses the dark side of innovation 🦹

The long-term properties of recent innovations, such as their side effects on public health or their ability to be broken down and assimilated into the environment at the end of the product’s life, are mostly unknown.

Even after taking longer life expectancies and improved cancer detection into account, there remains a statistical relationship whereby cancer rates are higher in richer industrialised countries.

Allergies such as asthma are becoming more prevalent in many industrialized societies except – interestingly enough – in Amish communities that shun many modern innovations. Human sperm counts have dropped over 50% in the period 1973-2011, but we don’t know why.

By the time we fully come to terms with the dark side of innovation, it may be too late. 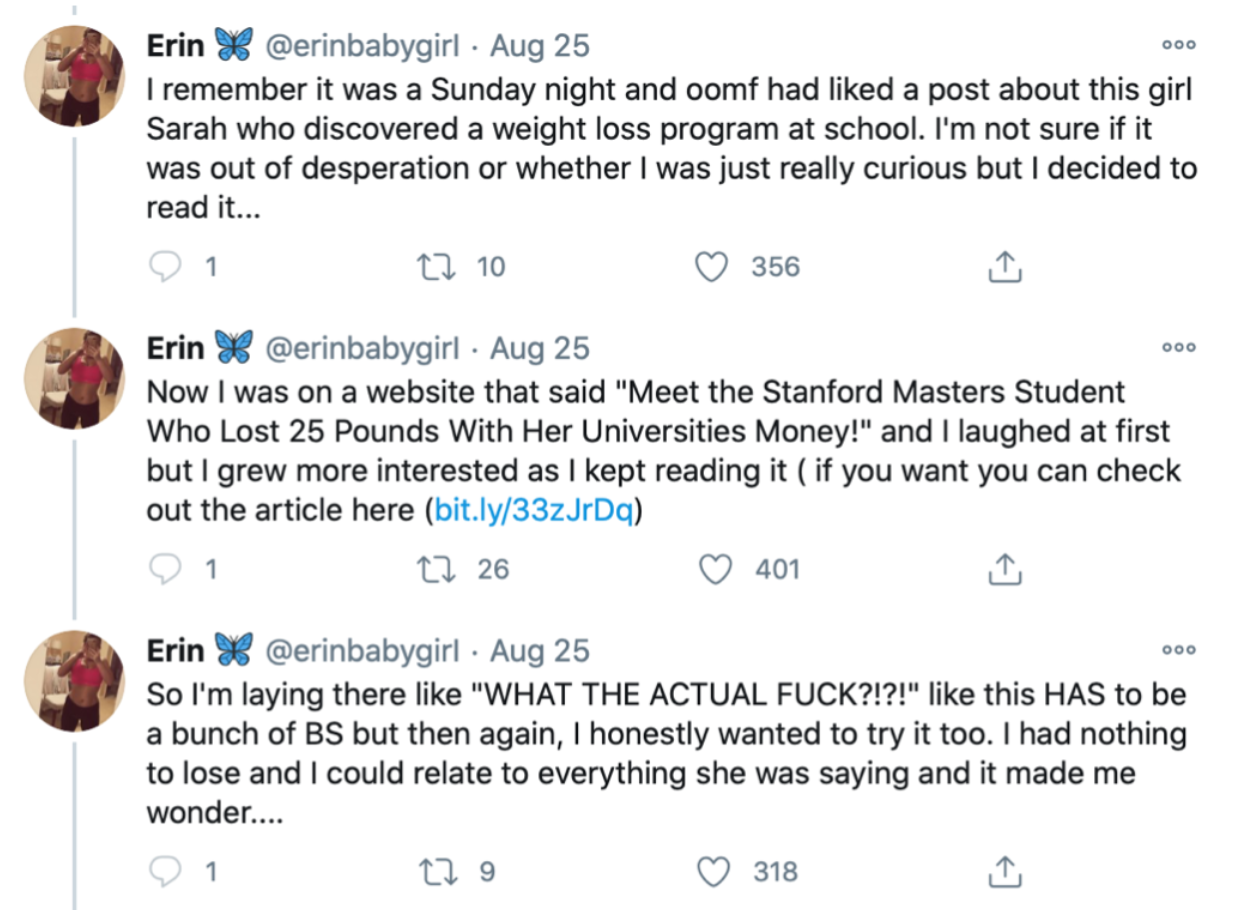 A global pandemic has done little to dissuade sleazy weight-loss marketers. Their ability to hustle and ignore the consequences puts even Gary Vee to shame.

There's a new set of viral threads circling Twitter posing as a young girl named 'Erin' who is documenting a fake weight-loss transformation. Hidden within the tweet thread is a link for -- yes, you guessed it -- diet pills.

It's not the first time this has happened. In 2015, a single individual was found to have created over 750,000 fake Twitter accounts to peddle Green Coffee Bean Extract (also a type of diet pill!).

In 2018, a VICE article uncovered a fake viral tweet that had stolen a fetish model's photos and told a fake domestic abuse story just to try and sell 'skinny tea'.

Despite reporting the thread multiple times over a week ago, Twitter has so far failed to do anything about it. So far, the tweet in question has been shared over 4,500 times. Many of the accounts reposting it are fake.

This week's newsletter was written by Aimee Pearcy.