It's Black Friday, and Amazon workers are staging protests across 15 countries.

In a movement dubbed #MakeAmazonPay, Garment workers in Bangladesh, call centre workers in the Philippines, and warehouse workers in the US, Europe, and Mexico are staging coordinated protests today.

The statement, which has been signed by 39 organisations and sent to Amazon, reads:

"During the Covid-19 pandemic, Amazon became a trillion dollar corporation, with CEO Jeff Bezos becoming the first person in history to amass $200 billion in personal wealth.

Meanwhile, Amazon warehouse workers risked their lives as essential workers, and faced threats and intimidation if they spoke out for their rights to a fair wage.

As Amazon’s corporate empire expands, so too has its carbon footprint, which is larger than two thirds of all countries in the world.

But instead of giving back to the societies that helped it grow, the corporation starves them of tax revenue. In 2019, Amazon paid just 1.2% tax in the United States, where the corporation holds its headquarters.

The pandemic has exposed how Amazon places profits ahead of workers, society, and our planet. Amazon takes too much and gives back too little.

It is time to Make Amazon Pay."

The letter includes 25 demands, including:

In other Amazon-related news, Amazon warehouse workers have recently filed for a union election in Alabama.

If they win, it will be a huge victory for organised labour in the U.S -- the south in particular.

Right now, only 9.8% of workers in Alabama are members of a union, compared to 10.3% nationally. 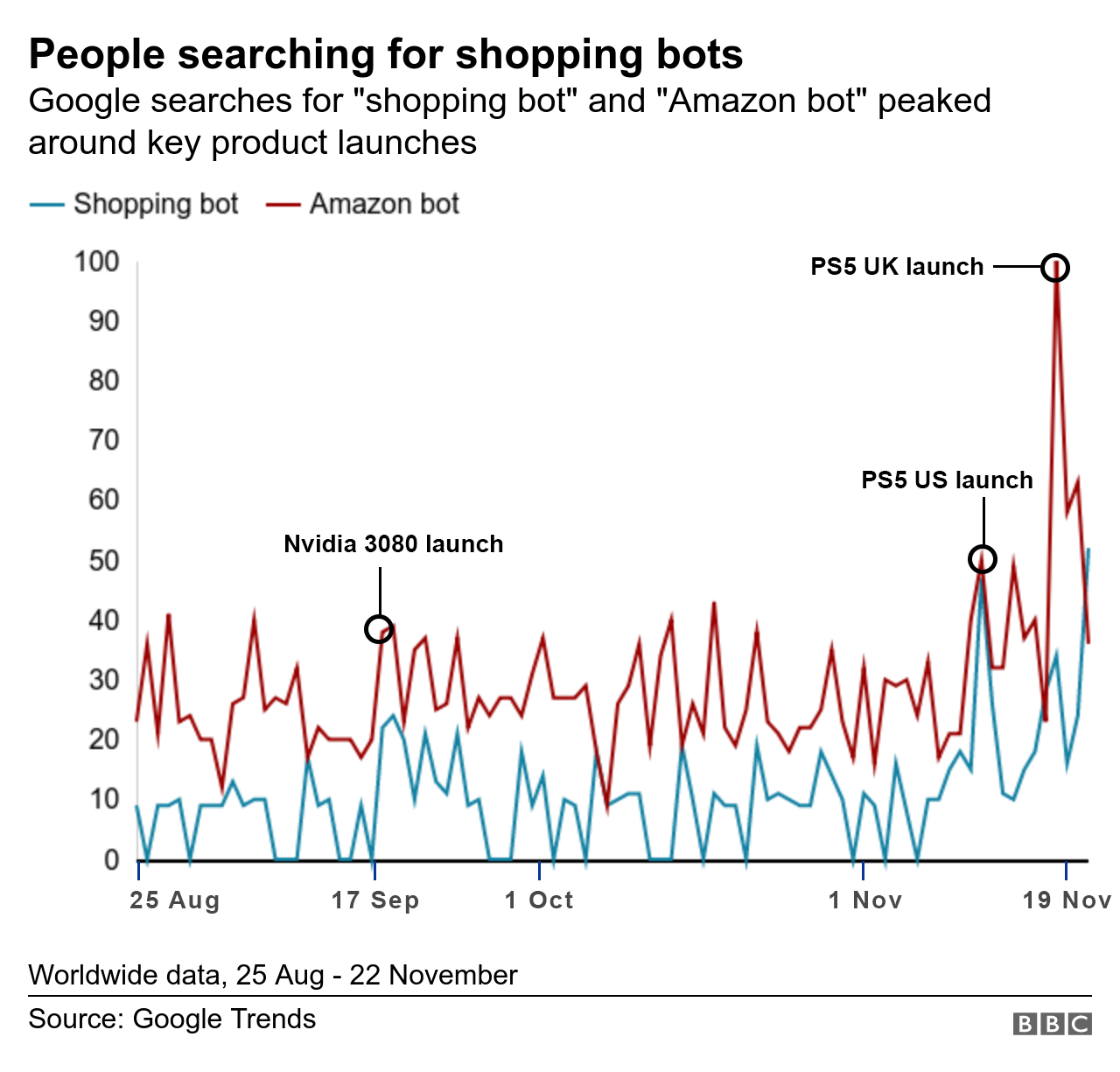 Missing out on Black Friday deals? Blame the bots.

Every second, bots are crawling the web, snapping up in-demand gifts so people can make a profit by reselling them. It turns out there's a particularly big market for shoe bots. The r/shoebots Reddit community has almost 23,000 members.

But around the PS5 launch, Google searches for "shopping bot" and "Amazon bot" peaked (that's probably how this guy ended up with 37 of them in his living room).

Here are some of the key findings from Radware's 2019 Annual Bad Bot report:

As part of the PS5 launch, some online stores added extra measures to discourage the use of bots...

UK chain Currys PC World listed PS5 consoles to buy for £2,449 -- £2,000 more than its retail price of £449. A note on the product page revealed that customers who signed up to the priority pre-order list would have received a discount code to knock £2,000 off the price tag.

Those who bought the PS5 without a discount code did not receive the product and were refunded within a few days.

Just in case working from home in a pandemic wasn't already exhausting enough, Microsoft is giving managers access to reports that allow them to drill down into data on an individual level to find out who is participating less in group chat conversations, who is sending fewer emails, and who is contributing less to group documents.

The tools have been available since 2019. According to Microsoft, they are designed to “provide you visibility into how your organisation works.” Instead, it seems like a great way to turn what could have been a quick five minute phone call into a long, drawn-out hour-long messaging conversation in the name of being productive.

This isn't the only example of increased surveillance by companies over the past few months.

In The Age of Surveillance Capitalism, Shoshana Zuboff wrote that the workplace is “where invasive technologies are normalized among captive populations of employees".

The pandemic has accelerated this -- and unfortunately, these practices will likely stick with us long after it is over.

😬 AWS went down this week, and it 'took out a large chunk of the internet' with it. Many people were completely oblivious as to how much they relied on it until their doorbells and vacuum cleaners stopped working. Yikes.

♟️ Chess is cool again. After years of flat or negative growth, sales of chess sets have surged 87% in the U.S. after the release of Queen’s Gambit on Netflix. Meanwhile, chess book sales rose 603%, according to research from NPD Group.

💌 Online dating: Who are you really talking to? This week, Ilona Cabral took a deep-dive into Vida Select, a dating agency that hires freelance writers to chat to people on dating sites and help clients find love. Sounds, uh, romantic.

💬 Are social media platforms all merging into one? A couple of weeks ago, Twitter announced Fleets. On Monday, Snapchat launched 'Spotlight', a feature that displays videos based on how popular they are, rather than who created them (kind of like TikTok...and Instagram Reels). An Axios report suggests that "as social media companies adopt similar features, expect them to emphasize how their core values shape their versions of those features." 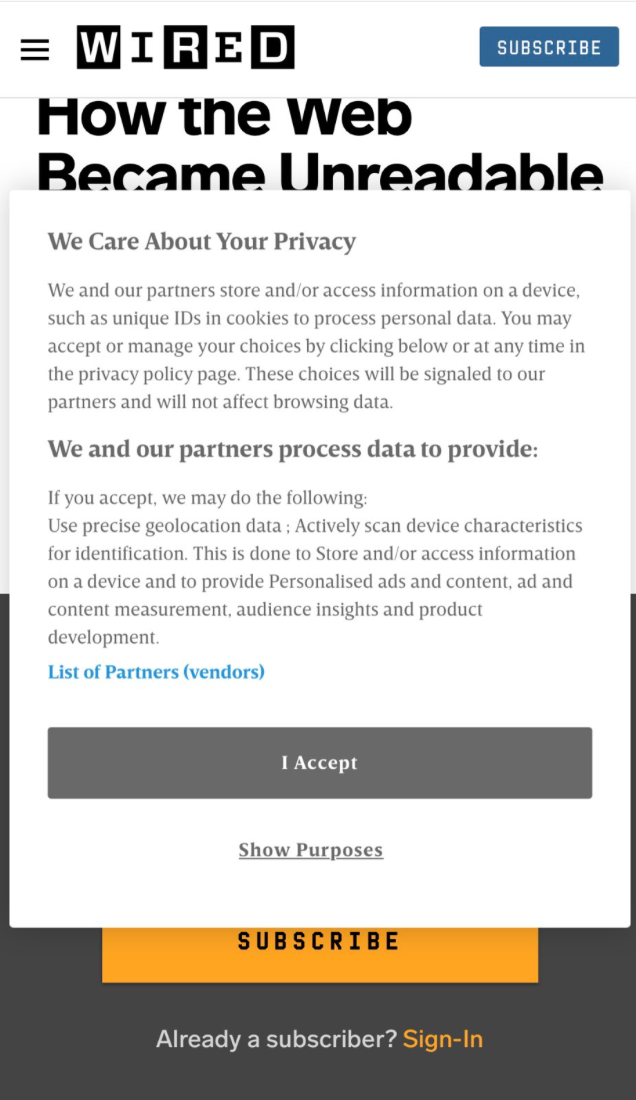 How did the web become unreadable?

Guess we'll never know, 'cause it's too unreadable.