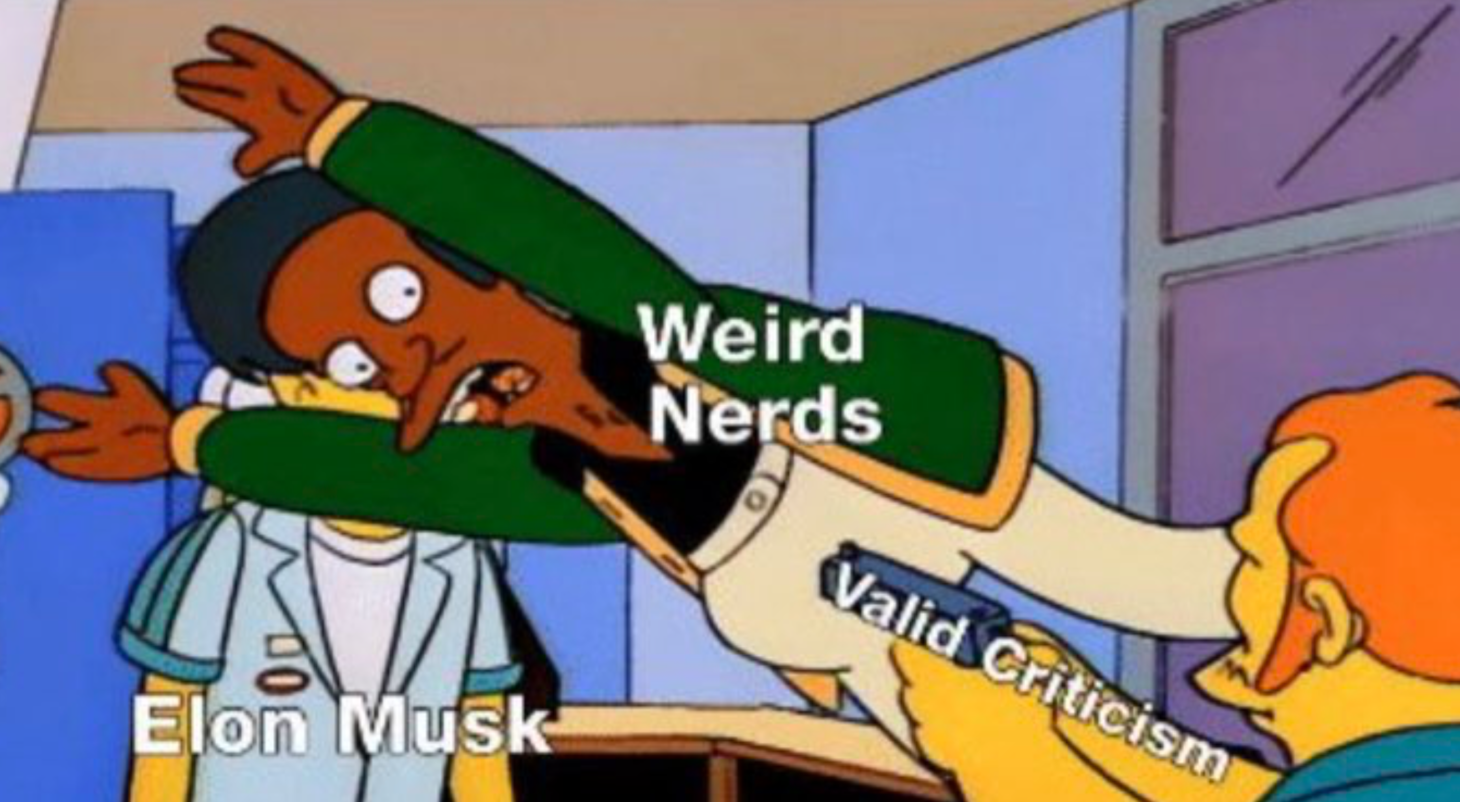 🚘 Tesla puts out a job ad for someone to fight off Musk's critics...and then backs down

Last week, Tesla posted a job advert for a remote customer support specialist. The job description stated that as part of the role, the person hired would be required to "address social media escalations directed at the CEO" -- likely from angry customers whose windows have smashed or whose, uh, roof blew off.

But it seems that less than 24 hours, the job advert was updated, and the requirement was removed (possibly when the HR team realised there are thousands of Musk-enthusiasts online who will defend him for free).

More recently, Musk has issued a $100m prize for new carbon capture tech. (Someone should probably tell him about forests.)

In a public Twitter post on Jan 14, Jack Dorsey announced that he did not "celebrate or feel pride in our having to ban @realDonaldTrump from Twitter." He also told users, "We are trying to do our part by funding an initiative around an open decentralized standard for social media. Our goal is to be a client of that standard for the public conversation layer of the internet. We call it @bluesky."

bluesky is an initiative started by Dorsey back in 2019. He has previously referred to the project as the “standard for the public conversation layer of the internet.”

While it is still uncertain how the project would ultimately operate, it would be designed to give platforms less centralised responsibility when it comes to deciding who does and does not have a voice on the internet.

This month, the team released a review of the decentralised web ecosystem and offers a glimpse into who has been working at bluesky, and what has been happening.

And while the music, sports, and film industries struggle amid the pandemic, the video gaming industry is surging. Even politicians have been turning to video games to reach younger voters, such as Alexandria Ocasio-Cortez who used Animal Crossing to campaign virtually back in May 2020.

Last year, Netflix added a "New & Popular" tab. Now, to save you the effort of trawling through Netflix's catalogue of terrible shows yourself, you can get an algorithm to do it for you.

“Our members can basically indicate to us that they just want to skip browsing entirely, click one button, and we’ll pick a title for them just to instantly play,” said COO and chief product officer Greg Peters.

In Netflix's earnings presentation, co-CEO Reed Hastings joked that they might name it after Google's I'm Feeling Lucky shuffle feature. But Peters dismissed this and said, “We’re going to come up with something better than that, so stand by for this. You’ll see it when it rolls out."

Loon was a Google project designed to beam high-speed internet in remote parts of the world. The project garnered lots of attention when it helped restore cell services knocked out by a hurricane to restore basic community in Puerto Rico back in 2017. And just last year, Loon successfully stepped up to provide commercial connectivity services in Kenya after it was given the go-ahead by the government.

But after nine years, the firm has revealed that it has ultimately failed to find a sustainable business model.

“The communities in areas too difficult or remote to reach, or the areas where delivering service with existing technologies is just too expensive for everyday people. While we’ve found a number of willing partners along the way, we haven’t found a way to get the costs low enough to build a long-term, sustainable business. Developing radical new technology is inherently risky, but that doesn’t make breaking this news any easier,” wrote Loon chief executive, Alastair Westgarth, in a blog post.

As much as I'd love to include another Elon Musk meme, it has to be this TikTok video of millennials trying to keep up with Gen Z.