₿ Hand over your bitcoin or your penis stays in the cage.

In October, security researchers found that the manufacturer of a chastity cage that could be unlocked remotely had left an API exposed that made the appliance vulnerable to hackers.

Cellmate chastity cages were hacked and locked by an attacker, who demanded a ransom of 0.02 BTC (approximately $750) to unlock them. According to a screenshot obtained by a security researcher, the hacker told one of the victims, "Your cock is mine now."

It goes to show that just because you can connect your penis cage to the internet, it doesn't mean you should.

🔥 A psychologist's license was suspended because her Instagram was too sexy.

Kaat Bollen, a Flemish media personality and former psychologist, has given up her license after the Belgian Commission of Psychologists reprimanded her because she posted “indiscreet” photographs of herself online and directed a pornographic film. The controversy has ignited outrage online.

Bollen herself has publicly criticised the decision and has also announced that she will be giving up her license altogether.

“Why is sexy and/or feminine not worthy,” Bollen wrote. “And since when do we psychologists judge the dignity of others? Shouldn’t we have an open mind and encourage authenticity? Since when should we as psychologists have to be more worthy than others? Aren't we just people trying to be there for other people? Is our strength as a psychologist not precisely in being human and the encounter between two real people?”

🏦 Why gig workers are turning away from traditional banks.

Traditional banks are poorly designed for today's gig economy, and gig workers are beginning to look for alternatives that are more closely tailored to their needs.

“Although gig work has been growing exponentially in recent years, the system has been broken for these workers, who lose 2-20% of their income due to an outdated system,” says Craig J. Lewis, founder of Gig Wage, a platform that enables employers to simplify contractor payments and pay contractors instantly.

"We're helping not just the gig workers, but the businesses that support these workers and provide work opportunities and earnings opportunities."

🤥 Period tracking app settles charges over allegations it lied to users about privacy.

Flo is a period and ovulation tracking app with over 100 million users. It has been under fire after the Federal Trade Commission (FTC) complained that the company had been sharing sensitive data, including users' period dates and pregnancy plans, with marketing and analytics companies.

Following the settlement, Flo will now be required to notify users about how their personal information was shared. It will also have to ask for permission before sharing any sensitive data in the future.

Many of the tech companies that fuelled the demand for these offices have been re-evaluating the value of being in the offices vs. working from home as a result of the pandemic:

"Google will keep its employees home at least until July, while Pinterest paid nearly $90m to break a lease on an unbuilt, 500,000-sq ft office it no longer needs. Facebook has stated that it expects at least half of its employees will work remotely for the next five to 10 years, while Twitter announced it would let employees who wish to do so work from home “for ever”.

What this means for the future of San Francisco, and how it will change as vaccines are deployed, is still unclear.

👾 Maybe a Tamagotchi would help you feel better.

Tamagotchi was first launched in 1996. And 25 years later, it looks like they might be making a comeback as people look to distract themselves from doomscrolling Twitter and refreshing the news.

“Tamagotchi pets were one of the first virtual pet games and were phenomenal. Some people engaged in Tamagotchi pets to gain psychological fulfillment through feeding, grooming, and training a simulated pet,” says Lin, a PhD candidate in cognitive science at the University of California, San Diego.

This talk by Brie Code at the 2017 Games Developer Conference discusses the underlying physiological reason why we love "caretaking games" like the Tamagotchi so much.

🌊 Sea shanties have taken over TikTok

Nathan Evans is a 26-year-old postman from Scotland. On Dec. 27 he posted a rendition of a 19th century New Zealand folk song, Wellerman, to TikTok. The video has since has surpassed 1 million views on TikTok and been incorporated into countless other TikToks.

One of the most common theories behind the recent boom in popularity of sea shanties is that they do not require any musical training to be sung well, and are designed to be sung by a crew -- making them the perfect way to connect amid the pandemic.

"Everyone is feeling alone and stuck at home during this pandemic, and it gives everyone a sense of unity and friendship," says Evans. "Shanties are great because they bring loads of people together and anyone can join in, you don't even need to be able to sing to join in on a sea shanty."

And while influencers themselves may have little awareness of these algorithms, they can influence both their reputation and their income.

"Non-risky influencers — who are hired more frequently, and paid more — tend to be white, beautiful, heterosexual with long-term boyfriends. Later, they become mommy bloggers," writes Sophie Bishop in her article in Real Life Magazine. "Generically, “risk” also means content that falls outside historically stable and recognizable verticals like makeup, fashion, travel, and cooking. Success in each of these genres is also contingent on whiteness. 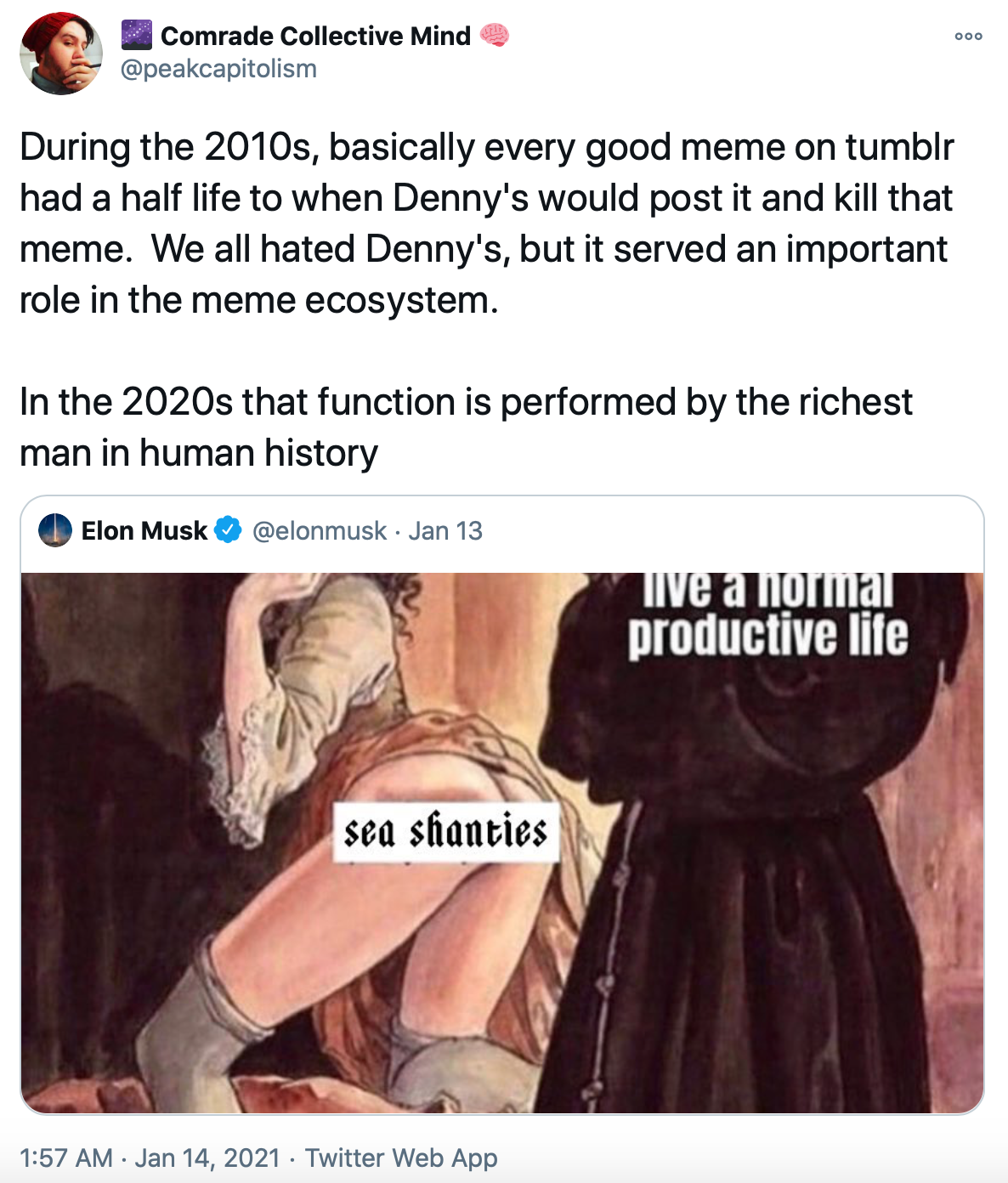 The most accurate analysis of Elon Musk's tweets that I have seen so far.